News flash: I ate a fish sandwich in Michigan this weekend.

I had just given a talk at a suicide awareness event on the wide and beautiful shores of Lake Huron, and afterward, feeling reflective, I’d gone back to my bed-and-breakfast to do some writing. But the day was too beautiful, the lure of late summer too sweet, and my itchy Self was too restless to sit still. Self wanted to go for a walk in that state park up the road. Then maybe go for a swim. Then go into the town of Caseville to top off the tank with gasoline. Then get a sandwich. Then see if I could find a pocket of halfway-decent cell service and call my sister-in-law to wish her a happy birthday.

Self said: Let’s do it, girlfriend. Come on. Get up off your ass.

I replied: Okay. But I should probably bring a raincoat.

Self said: No, dummy, you don’t need a raincoat.

Self said: You’re already wet. Why don’t you go for that swim, chica? 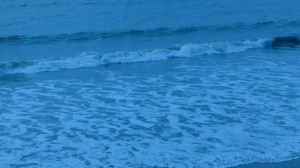 I thought this was a fine idea, so I crossed the road to the beach. From the top of the stairs, I could see a little group of teenagers frolicking in the waves under a threatening sky. It rained harder. The wind kicked up. I thought: Dark clouds. That’s not good. Self then accused me of being a lame-ass gutless sissy, so what was I to do? I had no choice but to strip off my shorts and t-shirt and swim out into the cresting water.

That’s when I started thinking deep thoughts. Which I should never, ever do. Normally when it happens, I call my brother Danny, but A) I didn’t have my phone on me, and B) I was swimming.

I thought: Waves. Yes. This is my fate. I am lashed and tossed by the fickle undulations of life. Alone!

I thought: I am capable. I am strong. I can ride each wave as it swells. Alone!

I thought: Perhaps I am called to drift thusly on this peaking sea of happenstance and hardship. Alone! Alone! Alone!

At which point Self interrupted, howling: WOULD YOU PLEASE SHUT UP WITH THE WHINY EXISTENTIALIST GARBAGE? IT’S SO CLICHÉ!

Self continued: ALSO, DID YOU SERIOUSLY JUST USE THE WORD “THUSLY”?

Self concluded thusly: IF I WANTED TO HEAR SHITTY POETRY, I’D WRITE SOME MYSELF AND PERFORM IT AT A SLAM!

Which woke me from my reverie. I suddenly realized that the wind had whipped into something shy of gale-like force, the rain was horizontal, and my shorts were flying down the beach as though escaping years of torment under my regime. I do not believe I was ever in any actual danger. Not in the sense of, you know, dying. Nevertheless, I had clearly incurred the wrath of God and/or Nature, and I raced out of that lake as fast as my flapping middle-aged-lady limbs could muster. After retrieving my liberated shorts, I dressed my wet Self in my wet clothes and drove my little blue rental into Caseville to get gasoline and a sandwich.

There I found a tiny two-pump station, the kind that requires you to go inside, speak to a human being and pay for your gas before you pump it. I was saturated. My long hair was in a crazed Medusa tangle. I went in, grabbed a bottle of water, brought it up to the counter and asked for 10 bucks’ worth of gas.

The man at checkout gave me a deeply questioning look. As if to say: WTF?

There were a few teenagers down there too, I quickly added, as though this were the equivalent of being guarded by a squad of muscular Navy SEALS.

He gave me a look of concern cut with bafflement. And in that moment, I saw myself as he saw me: as a slightly unhinged eccentric dripping the contents of Lake Huron onto the floor, shorts splotched with sand, hair spazzed in a wild gray nimbus.

Self remarked: You look sooooo together right now.

And in that moment, I remembered to ask about the sandwich. Where to get one?

“Well,” said the man, “if I weren’t working, I’d tell you to come to my house, and I’d make you one.” He smiled. It didn’t quite erase the bafflement and concern, but it came close.

I smiled back. We chit-chatted some more. I told him I was there to give a talk, though I didn’t say what or where or for whom. For some reason he responded to this news with a horrified DON’T TELL ME YOU’RE A PSYCHOLOGIST, and when I said “no,” he gave me a cheerful fist-bump. I said goodbye, pumped my 10 bucks’ worth of gas, then went off to buy a fried pollock sandwich with a cup of broccoli soup.

Self and I ate them both. I called my sister-in-law to wish her a happy birthday, and I didn’t feel alone. No bad poetry resulted.