Last weekend, in the unending and ever-lovin’ spirit of Figuring Shit Out, I replaced the “J-bend” trap on my upstairs sink and then, as an encore, fixed a recalcitrant clog. The damn thing just wouldn’t drain, and when I tried to snake it, I popped a hole in the rusty bend that I then patched pronto with potent plumbing-repair putty, and yes, the excess alliteration in that phrase makes me very, very happy.

I knew the patch wouldn’t hold forever, so I had to replace the pipe. And I had to unclog the sink while I was at it. Hmmmm, I thought, crossing my arms in a reflective pose as a thought bubble formed above my head.

So I bought a j-bend. I read the directions — thank God for directions! Then I bought thread tape to seal it — thank God for thread tape! Then, realizing I didn’t actually own a pipe wrench large enough for the pipe in question, I bought one of those, too, admiring its size and heft, the way it fit in my hand and enhanced my womanly strength and made me want to chew and spit chaw into a Dixie cup. I felt curiously empowered. I decided, once again crossing my arms in a reflective pose, that it would be my weapon of choice in the event of a zombiepocalypse, which, okay, might require some additional and creative F.S.O. But nothing I can’t handle.

The plumbing job was ridiculously easy.  It took whole seconds rather than nanoseconds, but it still merited a few nifty disco moves in celebration, and I felt profoundly relieved that I hadn’t bothered to call the plumber. A trickier task was unclogging the the pipe beneath the strainer, which had rusted into the sink and demanded intensive grappling with assorted tools, one of which slashed the knuckle of my left index finger in a moment of violent carnage that I failed to notice until gushing whorls of my own blood appeared in the water. (WHAT’S ALL THAT RED SHIT?, I wondered.)

Bleeding, I yanked out the strainer. I snaked the pipe. I hauled from its depths a blob of Tangled Hair and Other Revolting Sink Gunk (THORSG) that did not make me vomit but made me grateful, once again, that I hadn’t called the plumber. I bandaged my wounded knuckle. I replaced the strainer with a plastic one less likely to rust and gather future clots of THORSG. And I did a few more funky disco moves, but not for long, and only in my mind.

Later, I wondered about my propensity for stupidity and my thick-headed insistence on self-reliance. True, this time I didn’t need to call a plumber, but I certainly could have rung up a neighbor for help, and I certainly might have avoided the bloodbath in my sink. Several friends have offered to help with such things. But part of widowhood is the inevitable psychic push-back against the universe that put me in this spot. It’s the OH, YEAH? impulse, the urge to mouth off at the Powers That Be with bitchy outbursts of SO I’M ALONE, HUH? and YOU THINK THIS’LL BREAK ME? as well as the deeply satisfying, utterly childish I’LL SHOW YOU! PPPLLLLLL!!

Yep. I showed them, all right. I fixed the sink all by myself. Hurray for me. Pppllllll.

This is its own kind of trap, of course, and it accrues its own kind of THORSG. There’s a difference between being alone and being isolated, between independence and obstinacy, between acceptance of my current state and the rigid insistence on remaining in it. I’m alone now; refusing to reach out will only ensure I stay that way. And believe me, I don’t want to.

Still, when the zombiepocalypse arrives, self-reliance will have its day. You’ll find me on the porch steps with my pipe wrench, hefting its weight and spitting my chaw. I’ll be armed. I’ll be ready. Watch out, the widow is coming.

You might not know this, but a woman you love was groped. Maybe she was fondled in the breasts. Maybe the crotch. Maybe she was kissed when and where she didn’t want to be kissed. Maybe some coach said something sexual about her body. Maybe her privates were grabbed by her friend’s creepy uncle in a barn. Maybe a total stranger squeezed her tit while she was hustling through a crowd in Times Square. Maybe some pallid thug flashed her. Maybe a self-styled playa sent her a shot of his erect penis via Facebook message.

You don’t know about it because they never told you. Maybe they never told anyone. Maybe they were too embarrassed. Maybe men have always been so dominant in our culture, in our families, in our day-to-day interactions, that we automatically diminish our selves, our points of view, our feelings of worth. We are less than men. We’ve been less than men for so long that we struggle to explain why we’re not. When a man tells us that we’re being pushy, whiny, bitchy or defensive, we have a hard time saying: No, I’m only being human. I’m only being as much me as you’re being you. And when a man grabs us somewhere he shouldn’t, somewhere that’s ours, we have a hard time saying: No, I’m more than an object. Your object. Your idea of who and what I am.

What we should do: Kick the asshole in the nutsack, then tell everyone in shouting distance.

What we usually do: Curl into a ball, feeling dirty and flushed with shame.

Right now, dear men, I want you to try something. I want you to imagine that some woman you love, possibly several, at some point in her life had good reason to kick a man hard. But didn’t. Then carried it with her, all of it — the violation, the icky-sticky embarrassment and gnawing anger, the unleashed, phantom kick — for decades.

Picture it. The whole thing. What happened to her then. What happens to her now every time she learns it happened to someone else. And the next time some repellent pig brags about groping a woman, then dismisses it as “locker room” talk, don’t laugh. Don’t brush it off. Don’t ignore every story that comes out in the aftermath, including the latest allegations from violated women who sat quiet for years.

And for God’s sake, men. Don’t vote for him. 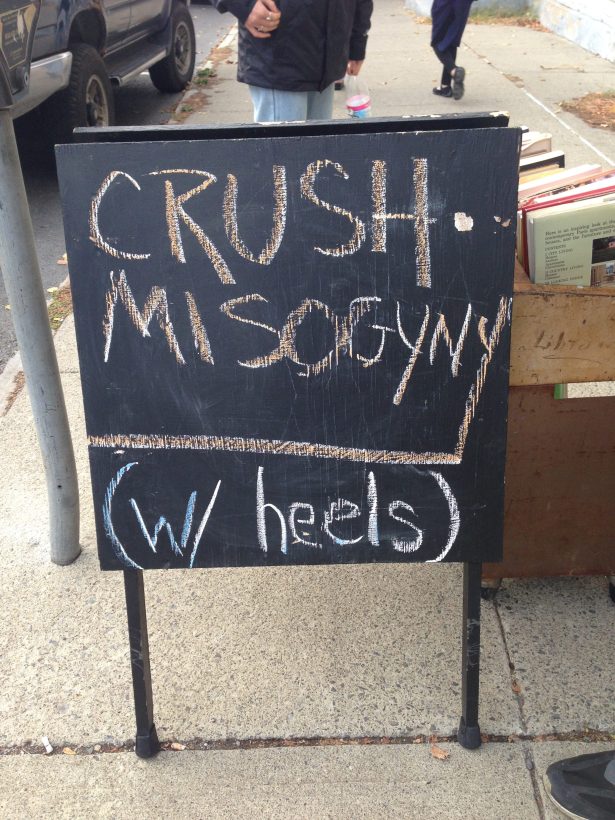 This past Monday marked five years since two cops appeared at my door to say that my beautiful, brilliant husband had leapt to his death from a roof near our home. Every year, I try not to dwell on the anniversary of Chris’s suicide. Every year, I fail.

At work I hit my deadlines, chit-chatting with colleagues and making my plans for the week, all while carrying the weight of the day inside me. I didn’t want to feel it. Don’t go there, I told myself. I wanted Monday to be normal, the week to be normal, my whole life to be normal.

It isn’t, of course. But whose is? And who doesn’t carry around a pocketful of dates that throb with consequence and pain?

In remembering Chris, I try to focus on the joyous markers and all their many blessings: his birthday, our wedding day, the births of our three children. I try to dwell with gratitude on his life and lingering gifts. I want to remember the light and love in his eyes, the way he laughed and kissed and cracked a grin. The fedoras he used to wear, the bike rides he used to take: I want to remember those, too.

But even when I try hard not to focus on the anniversary of his suicide, it focuses on me.  The 26th of September licks at me like the flickering tongue of a snake.  I think of Chris’s profound sadness, the changes that overtook him in the months before his death and the rupture in the universe — the outrageous, senseless, gaping violation of it –that sucked him away. I think of the long day that followed. An endless day. A day that still feels like yesterday. A day that always will.

And yet a lot has happened in the five years since he died. More life, more love, more loss. I’ve traveled to Ecuador, Edinburgh, Jamaica, Yosemite. Watched one daughter graduate high school, another graduate college. Marveled at a son who turned 16, filled with strength and kindness. Wrote a book about grief. Told a story for “The Moth.” Did a Tedx talk. Buried my second mother and my best friend. Held my baby grandniece — Chris’s baby grandniece, the most perfect creature you’ve ever seen, born to parents who wed on Chris’s birthday. Laughed.

I got laid off from one paper and hired back by another. Started this crazy blog. Took up jazz fiddle. Shoved the piano into the living room (alone). Contemplated getting a tattoo (still contemplating). Adopted two kittens. Made new friends. Turned 49, then 50, then 51, then 52, then 53.

So here I am, a little older and grayer, a little creakier, a little more arthritic in my knees and lower back, but not yet as old or gray or creaky or arthritic as I’ll be tomorrow. In another two years I’ll be 55, Chris’s age when he died. Yet more life will have passed, then more life, then more.

I believe in the eternity of the human soul. I believe in the solidity of human love. I believe that souls are love, and eternity is solid, and no one who spends his life embracing and lifting others is ever truly gone. I’ll see Chris again, of that I’m sure. But not right now. Not right here. My job is to be in this world, going about the business of living with whatever faith and relish I can muster.

So, no, I didn’t want to dwell on the anniversary of his death. But dwell indeed I did, all through Monday and the week that followed, thinking about the permanence of a moment and the transience of a life. Five years are forever. Five years are gone. How strange, that I lived five years without him.