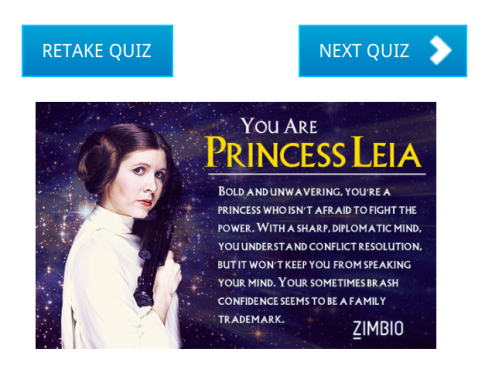 Like many other people, I took the “Star Wars” personality test floating around Facebook recently. And lo, it appears that I’m Princess Leia.

I find this result beautifully affirming (I am bold and unwavering! I have a sharp, diplomatic mind!) when I’m not grabbing my ears to reach for the baked goods (I have sticky buns attached to my head!). Who doesn’t want to be told she’s the heroine of an archetypal if badly written space saga?

Then I recalled that I had also taken the Peanuts personality test and learned that I’m Schroeder: artsy and aloof. This plunged me into a flurry of self-doubt — good God! Am I coldly analytical and standoffish, hunched over a piano in a quest for perfection?! — until I remembered I don’t actually play the piano.

And then I recalled that I had also taken Book Week Scotland’s personality quiz, which, ta da!, informed me that I am, in fact, Holly Golightly from “Breakfast at Tiffany’s.” No shit. Finally! Affirmation from the wise forces of Facebook that I am bubbly, gamine, party-animalistic and a just little bit tragic, especially when you take into account my long and pathetic string of sugar daddies. I’m not sure who they are, or where I’ve hidden them all these years, and whether they’re still interested in me now that I’m 50.

But what I really want to know is: Wouldn’t Princess Leia kick Holly’s ass? And Schroeder’s? I think so. Both of them at once, while simultaneously whipping all the men in the galaxy, and most of the ewoks, into shape. She didn’t need a sugar daddy. Okay, so she wanted Han pretty badly, and he was sort of a jerk about it, but you always knew she could and would kick his ass, too.

In other news, the Myers-Briggs test says I’m an ENFJ (extraversion, intuition, feeling, judgment). Some other test I can’t remember told me I’m an “ambivert,” i.e., some hybrid creature between an introvert and an extrovert, but to me that sounds like a sexual preference or an abstruse geometric concept rather than a personality type.

One thought on “princess schroeder golightly”