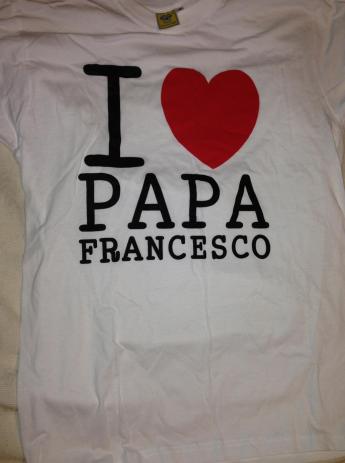 tell me you don’t want one

Here we have an item that has nothing to do with anything — death, woe, gnashing of teeth, shoveling of snow — other than my lovely daughter Jeanne and her recent, oh-so-fabulous school trip to Italy and Greece. (Yes, she went there. And NO, SADLY. I DID NOT.)

In Rome she ate lots of pizza and visited the Colosseum, the Forum, the Trevi Fountain and the Vatican, where she ooohhhed and aaahhhed at masterworks of the High Renaissance (I wasn’t there to hear her, but it’s a safe bet) and, even better, purchased this t-shirt, which I very much heart. The coolness of Catholicism’s latest pope is a matter much discussed elsewhere, and I won’t go into the specifics of his coolness here except to observe that, you know, it’s kinda nice having a dude in charge who apparently reads the same Gospels I do. (Love and forgiveness! Rock on!) It makes me feel warm and mellow and groovy inside, like all of a sudden I want to wear patchouli and crowd surf at a Phish concert, and I don’t even like Phish.

The point is, in 24 years of being Catholic, I have never owned, much less worn, a pontiff fan t-shirt. I have never before even idly considered such a thing in hypothetical terms, as in, “Oh, my ‘Hard Rock Cafe Vulcan’ T has holes in both armpits. Crud. If only I had a Pope Benedict v-neck to replace it.” But this one? I’ll keep it. And I’ll keep Pope Francis, too.