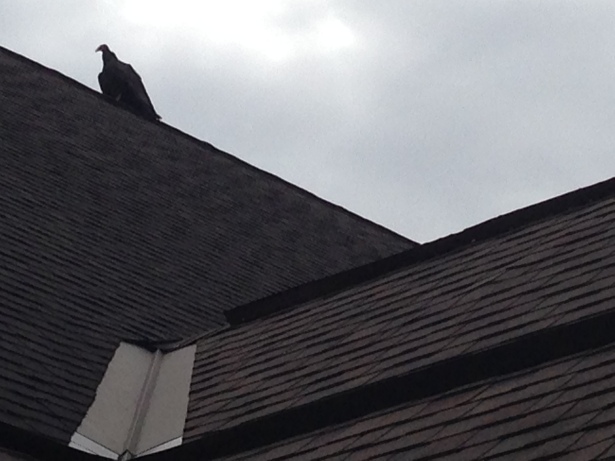 but they didn’t even mention obama

On my lunchtime constitutional today, the non-scariest thing happened: four birds of prey circled over my head. I repeat, this was a non-scary event. Totally. Yup. Because I’m not superstitious, and I DID NOT REGARD THIS AS AN OMEN OF DEATH, even though this particular avian foursome resembled vultures looking for carrion. And I was the closest thing nearby that remotely qualified. And they were eyeballing me hungrily, I could just tell. And as they were eyeballing me hungrily, I heard one of them rasp to the other, “What do you think, bro? Too old and stringy? Metallic aftertaste?”

Still, even as I heard this, I DID NOT FREAK OUT. I just squinted mightily and eyeballed them right back, although I’d just eaten yogurt and a banana back at my desk and wasn’t all that hungry, so I doubt I looked convincing. Probably the mighty squinting and faux-ravenous eyeballing just made me look older and stringier and thus less appetizing, because the four of them soon lost interest and landed on the peaked roof of a nearby church, where they then cooled their heels (do they have heels?) while discussing politics (do they have politics?).

BIRD ONE: What do you think? Is Hillary running?
BIRD TWO: Get a real question.
BIRD THREE: Dudes, look. That weirdo white-haired lady. She’s still there.
BIRD FOUR: I still say she looks a little fibrous.

They didn’t stay long. I expect they ran out of things to say to each other, or they lost interest in me, or they wanted to check out that new Japanese restaurant on Wolf Road. But they soon flapped off, leaving me with my pathetic squint and my craned neck and my TOTALLY NON-SUPERSTITIOUS NON-FREAKOUT in response to this symbolically loaded quartet of doom soaring above me. I didn’t really take it as a sign. I didn’t really believe I was about to drop dead on the short walk back to work. But yes, OK, I’ll admit it, I was a wee bit spooked. I’m not sure why I was wee bit spooked. Am I afraid of death? Raptors? Steepled church roofs? Speculation on the 2016 presidential campaign? Maybe I’ve seen too many movies, read too much Poe, heard too many yarns around campfires real and imagined. Maybe I’m still a child, and I just want to be scared.

Mostly, I was rapt by the raptors — by their beauty and majesty, by their circling grace and august silhouettes against the lightly tufted late-September sky. What I loved most, in watching them, was what I always love most about Nature: It doesn’t need us. It doesn’t care. It carries on without us, cutting through air and land and water with grace and selfless purpose, and if we’re lucky, we cross paths. In that sense, my lunchtime companions were indeed an omen. A good one.