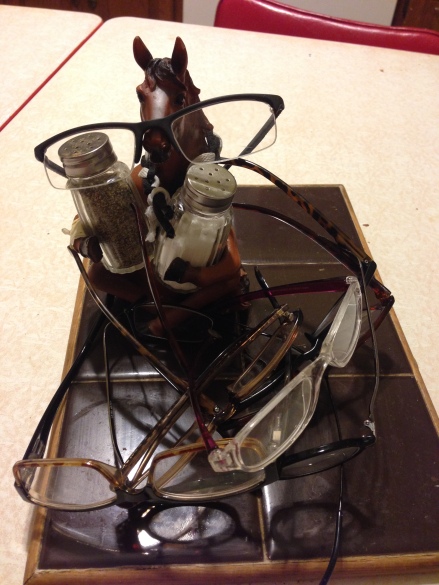 Someday, loooong after I die and the house is emptied of its occupants and most its crap, archaeologists and/or real estate agents and/or intergalactic alien explorers with seven eyes and 18 tentacles will find piles and piles of reading glasses.

I lose these 1.50-power babies allllllll the time. Losing them has become such a familiar part of owning them that I regularly purchase them in bundles; I buy cheapo glasses at pharmacies, department stores, dollar stores (where one finds the cheapo-est), every freaking place they’re sold. Why, if vending machines spat out cut-rate spectacles, I’d buy them there, too. I buy them even when I already have a stack of ready-to-go reading glasses in the kitchen, because I know, sooner rather than later, I WILL LOSE THEM ALL.

Occasionally I relocate prodigal glasses; when that happens, I celebrate their return by dressing them in fine robes and slaughtering the fatted calf. Why, just tonight, I found a missing pair on my head. Last week I found two missing pairs on my head simultaneously — wow, what a find! A couple months ago, while cleaning the car, itself an occurrence as rare and miraculous as ball lightning or a lint formation in the shape of the El Greco Pietà, I stumbled across three whole pairs! Holy shit! And they weren’t even broken!”Someday,” said my perspicacious and observant son over dinner, “We’re going to find 50 pairs of glasses in this house.”

I lose other things, too. Pencils. Pens. Socks, of course — just one at a time. Gloves, also one at a time. Earrings. Tylenol. When I have glasses, my ability to read more than three sentences at night before falling asleep. Hair ties. Printer cartridges. Boxes of raisins. Bags of clementines (twice). Once, in the fridge, I lost a half gallon of 2-percent milk. Christmas wrapping paper. Knit hats, but never the ugly ones that no one wears. Spoons: one spring we lost so many we almost ran out, prompting my late husband to develop a Theory of Random Spoon Migration that involved house guests accidentally ferrying steel cutlery home in their pockets or nostrils or something.

When my kids were little they lost pacifiers, although I actually think they took a much more active role in binky-dispersal than they ever copped to. One of them, I won’t say which, had a habit of tossing the damn things out of the crib during nap time, then howling in outrage until mommy or daddy fetched it. Mommy and daddy always did. Mommy and daddy didn’t object until the day that daddy, leaning into a corner to retrieve the abandoned infant-suck implement, asked: “How’d that get there?” And the kid said, firmly: “The hand did it.”

I loved that response: what a great way to shirk responsibility for any action! I’m surprised Dick Cheney didn’t use that one when he shot the guy bird-hunting! The possibilities are endless, aren’t they? Napoleon on invading Russia: “The feet did it.” Miley Cyrus on twerking: “The butt did it.” Any public figure anywhere who says anything moronic about global climate change or sexual assault or Ebola or the president’s daughters: “The mouth did it.”

So when I lose my reading glasses, I know exactly what to say. The head did it.