I’ve long regarded grief as a monster — as something ghoulish and hungry and shaggy and self-centered, crashing suddenly through my walls and splintering my furniture and my equilibrium with its giant paws and drooling, bloody fangs. It is a nasty thing. It gets in my face, it never showers, and its stinky B.O. alone is enough to bring me to tears.

Lately, though, I’ve switched metaphors. I’ve moved on to something a little smaller and fluffier, with better hygiene. Though, I must stress, it is a being no less annoying. And no less insistent. And possessed of no less spectacularly awful timing. Why, just last week it appeared — uninvited! how rude! — for no apparent reason except I guess I still miss my mom as much as I did 20 years ago, though the grief hadn’t visited in quite some time.

It’s an odd duck, and a pushy one. You’re familiar with its M.O., I’m sure. There you are, in the middle of life or work or vacuuming, when it waddles through the front door without knocking (not sure how it finds the key) and quacks obnoxiously for your attention. You have no choice but to drop your aforementioned life or work or vaccuuming and sit with this unwanted, awkward, splay-footed creature. You must tolerate its presence, entertain its eccentricities, listen to its painful, pissy business and cry as you pour it a cup of Earl Grey tea. You do this for as long as it decides to stay, then send it on its way until it barges in again uninvited at the next worst possible time.

At first, in the early days of loss, these visits occur several times a day. Then a few times a day. Then daily, weekly, a few times a month. And over time, as the visits become rarer and rarer and briefer and briefer and less and less sloppy with crying, you begin to hope that the damn duck is done with you forever — that finally, after all those unanticipated, difficult visits with all that tea, it will somehow lose interest in you and move on.

So it does. Until it doesn’t. When it does again. And one day, years after its first, knockless, arrival at your door, you’re picking your nose at a traffic light on the way to work when that same fool fowl whips open the passenger-side door and hops right in. It sits there, dangling its floppy little feet six inches above the floor mat, quacking away about the familiar painful business, the what-ifs, the what-nexts, the you-should’ves and why-didn’t-yous. All you can do is listen quietly and wipe the salty discharge off your face. And you don’t even have any Early Grey tea.

But if you give it its due, it’ll leave. It’ll scramble its feathery butt up the door and bail beak-first through the window, and it’ll do this speedy-quick if you flip on the radio and start blasting insipid upbeat pop. Colbie Caillat: that’ll do it. That usually sends the grief bird packing. And if it doesn’t, you can always lean over and give that odd duck the boot at the next traffic light, hoping that it waddles away for good, knowing that it probably never will. Bye bye, birdie. You’ll be back. 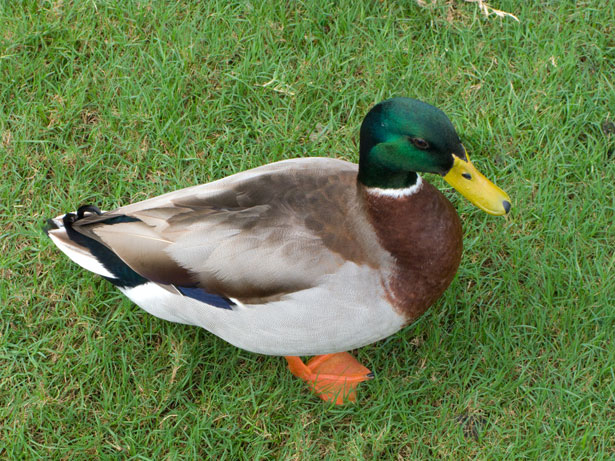