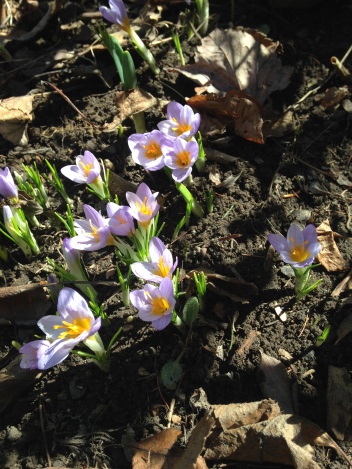 I am not a gardener. My mother was. My husband was. Both of them tried to convert me with noble attempts at prestidigitation that aimed to turn my black thumb green, but they never worked. Rest assured, I love flora of all varieties. I enjoy being in their company, basking in all their delicate and aromatic glory. But I’ve always had a certain way with plants: I kill them.

When I was a kid, Mama gave me pretty little impatiens in a pretty little pot. They died. Arriving in college, I received some plant or other (I don’t remember what) as a welcoming gesture on freshman move-in day. It died. My late husband often gave me living things from the vegetable kingdom, but after witnessing several slow deaths under my care, he stopped relying on me to actually keep them alive. He knew that anything requiring air and water for sustenance would need to acquire them from someone besides me, because even when I supplied them in a timely manner, my well-intended ministrations went somehow horribly awry.

Of the 15 or so houseplants Chris tended indoors, I’ve managed to keep eight of them alive. Although I grieve for the seven dead ones, the survivors remain my eight little miracles. Don’t ask me how I’ve done it. I water them now and then. I plead with them not to whither. I blow them kisses and dance the flamenco. At times I’ve been known to engage in human sacrifice just to appease them. Don’t scoff; it works.

Meanwhile, Chris’s gardens — and they’ll always be his gardens — are still out there, still obeying the cycle of life despite my floricidal nature. After he died, some lovely neighbors weeded when they saw the need or planted when they saw a gap. Bless them forever for it, but I knew I had to do something on my own. And so, the first spring after his death, I made a go at weeding and pruning and raking and watering, and I marveled at the way life sprouted from the dirt around me. How’d that happen? What’d I do? Something right? Nah. Must have been the flamenco.

On Sunday, barely a week after the last of the dismal, dirty snow chunks melted away in my front yard, I threw on a pair of shorts and started raking the garden. There, beneath a cover of dead leaves, I spied a spray of crocuses: lavender, hopeful and sweet. It was good to see them again. These graceful wee harbingers of warmth, yellow nosing from their middles, are a perennial reminder of the ephemeral Chris. Each spring, they return — and each spring, I stand there on my tiny patch of lawn, marveling at the beauty and the stubbornness of life, tossing up a whispered “thanks” to my late husband. They’re a gift. So was he.

4 thoughts on “the gardener”