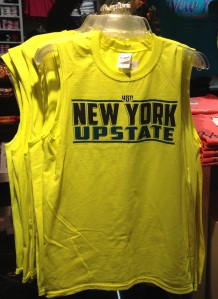 What’s wrong with upstate? Nothing’s wrong with upstate. I’ve lived in upstate New York for 29 of my 51 years. Four (minus summers) were spent in Clinton, Oneida County. One was spent in Canton, way, wayyy, WAYYYYY up in St. Lawrence County at the Canadian border. A solid 24 years running have been spent here in the the City of Albany, County of Albany, 150 miles north of New York City.

Which leads me to my second question: What’s wrong with “upstate”? I’ll tell you what’s wrong with “upstate.” It’s inexact. Certain downstate media monoliths too frequently use “upstate” to describe any town anywhere north of Westchester. They often do so without using any other clarifying geographical marker — a county, a land form, general compass point — that would A) provide the reader with detailed info, thus assisting comprehension, and B) help define the place in question as, you know, A PLACE. Because, let’s be honest, the word “upstate” does not designate place. It designates non-place, a cartographic negative understood and defined only by what it isn’t, as in: “Not the New York Metropolitan Area.”

I’m realizing, as I write this, that this screed of mine falls into a general category of upstate-downstate kvetching in which I periodically indulge, most recently when I crabbed about the habitual media usage of “Albany” as a synonym for “heinously corrupt state government.”

But having lived in the Empire State for more than half my life, I am constantly awed by the diversity of its landscape, backstory, people. There are so many mountains to hike, history to unearth, pockets to be discovered, fun to be had. To reduce it to That One Admittedly Awesome Place and then Everything Else diminishes the scope and wonder of all of it. Yes, downstate is down. Upstate is up. But to flip Gertrude Stein on her head, and who knew she was so gymnastic, there’s a lot of here here.  May as well identify it.

3 thoughts on “what’s wrong with upstate”