I’m not normally one to weigh in on pop-cultural paroxysms seizing the Twitterverse, even two days late. But I have to say it: Kathy Griffin’s “beheading” of Donald Trump was wrong. Wrong wrong wrong. It was stupid. Stupid stupid stupid. It was sorely misguided. It gives the Trump opposition a seriously bad name, tainting his critics with the stage blood of a mock assassination that does nothing to advance the  causes of peace, justice and compassion that those on the left presumably support.

Yes, okay, she had a right to express her displeasure with a faux decapitation. Thank you, First Amendment, and God bless America. Yes, it’s the business of comedians to push boundaries, especially in times of profound national stress, and occasionally they push these boundaries so hard that they draw blood. Jim Carrey has since come to Griffin’s defense, saying it’s her job to “cross the line.” Larry King says that’s exactly the sort of comic she is –a line-crosser, a boundary-pusher, the sort who goes “over the edge a lot.”

Yeah, right, okay. Lines. Boundaries. Edginess. I get it. As I think I’ve established pretty well in past blog posts, I am nooooooooooooo fan of the apricot-haired infantile swellhead currently taking up too much space in the Oval Office and, sadly, our collective American consciousness. I am ALL in favor of ridiculing him, his tiny everythings (mind, heart, hands, kidneys, whatever) and his nattering band of sycophantic munchkins. Mockery! Yes! Satire! Yay!

But I know my Jonathan Swift well enough to understand the creative and moral imperatives of political satire: To call out the horrors of a failed system with blackened, ridiculous overstatement. Swift challenged heartless British policies toward the starving with a 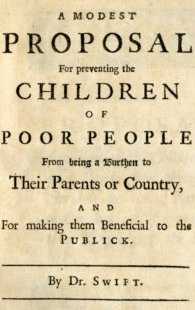 “modest proposal” to sell and cook Irish babies “in a fricassee, or a ragout” — a ghastly piece of irony that he knew enough to publish anonymously. But the ghastliness was born of compassion. It didn’t target ACTUAL BABIES; it took aim instead at the ruthlessness of the system. Had Griffin taken a more Swiftian tack on Trump, his head would have stuck to his body and polished off a large plate of authentic-Mexican food. (NOTE HYPHEN PLACEMENT, WORD NERDS.)

We need to do this properly. If we’re to oppose the man and his twisted reign for God knows how many months and years — and if we’re going to get through this AS A PEOPLE, which believe it or not, we are — we need to set some ground rules. Ready?

Do I really need to say it? Must I go into the whole we’re-either-fighting-for-democracy-or-we’re-not business? Do I have to point out that, hey, cracking jokes about killing the president is promoting violence and criminality and therefore A REALLY BAD and ANTI-DEMOCRATIC IDEA? That it’s, well, kinda breathtakingly hypocritical for a political wing that prides itself on being anti-gun, anti-capital punishment, anti-hatred, anti-bloodshed, anti-war? I guess I do.

3. NO JOKES ABOUT LETTING THE TRUMP VOTERS DIE.

I’ve gotten into a few Facebook spitting matches on this subject and may get into a few more once I post this. I am, how shall I put this, deeply perplexed and apoplectic to the point of hemicranial agony by my fellow lefties who A) claim to support government programs helping the poor, B) oppose the right’s draconian efforts to dismantle them, C) feel particularly outraged by attempts to gut Obamacare, which could end up killing Americans with preexisting conditions, but D) ARE TOTALLY OKAY WITH THIS SCENARIO if the dead Americans in question voted for Trump. The logic being: Hey, you voted for him, pal. You pay the consequences. Death penalty for you!

Once again, the hypocrisy takes my breath away. Aren’t we supposed to be the bleeding hearts? Don’t we claim to be supportive of people in dire straits? Like putative “Christians” who hurt the poor and exclude the stranger, liberals who ditch compassion for cruelty in some childish hissy fit of nyah-nyah retribution are betraying their own ideals.

4. PLEASE, I KNOW THIS IS HARD, BUT NO BLANKET DEMONIZATIONS OF ENTIRE CLASSES OF PEOPLE.

This is an obvious but necessary corollary to Ground Rule Number 3. I just don’t see any point in lumping half the American populace, or even 34.76543 percent of it, into a trash bin of Worthless and Heinous Devil Spawn, because, look, not EVERYONE who disagrees with me or belongs to some other party or lives in some other, redder part of the country is THAT BAD. They’re not! I swear! I know some of them! I talk to them! They talk back! Using their indoor voices! They’ve even been known to do me a solid when I need a little help!

We either have faith in our glorious democratic ideals and love them, work for them, push toward them, cross the divides between us and press on with each other, or we don’t. And if we don’t, we need to act as if we do, or there is no getting out of this at all.