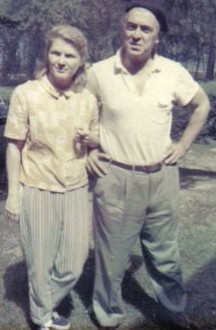 it seems mama had some magic pockets, too

A colleague asked, earlier today, whether I had any analgesics with me at work.  I wasn’t sure but thought so, explaining that my bag was, in fact, a Cavernous Vessel of Miscellaneous Crap, although I didn’t exactly use those words.

Instead I said something along the lines of: Ummmm, probably. Lemme take a look. I kind of have everything in here. You know. Just in case.

And as I clawed around in the bag’s vast sunken reaches, reaching past pens and reporter’s notebooks and band-aids and bacitracin and chocolate and moolah and moisturizer and hand sanitizer and CDs and thumb drives and nuts and cough drops and tights and spoons and earrings and cats, and yes, I’m joking about the cats, I told my co-worker about my father’s magic pockets.

I’ve written about them before. I‘ve written about him plenty, my late father Louis, a brilliant, eccentric, complicated and profoundly decent man with THE biggest heart and THE largest pants pockets of anyone who ever lived. He was born in 1907 — which means he was 56 when I was born, which also means he’d be 110 today, which totally blows my mind — and wore the smashingly high-waisted pants of a 1940s fella, the sort that buckled above his belly button and featured large, billowing pockets of voluminous capacity.

Whenever I needed or wanted something, I ran to my father with a Daddy Daddy Daddy! And whatever it was, he always, happily, miraculously had it on his person. “Well, let’s just check my magic pocket,” he’d say, then reach down, jangle around for few seconds and then haul up a gleaming pile o’ stuff topped with a Lego or a mint (no thumb drives in those days).

This isn’t exactly a repressed or traumatic memory. No trips to the shrink to parse my feelings about capacious paternal trousers. But until this morning, as I handed my coworker a bottle of generic ibuprofen retrieved from the depths, I had never fully realized that I’VE INHERITED THE MAGIC-POCKET GENE FROM MY FATHER. Oh my God, I’m Daddy!! I thought, flashing back to all those diaper bags I once packed with toys and tricycles and travel playpens and extra playmates for my children; to all those overstuffed backpacks filled with Every Possible Medical Supply and Every Possible Snack that I still bring on day trips with offspring; to all those winter-parka pockets crammed with extra hand warmers and extra mittens and extra money and extra skis.

Is it a pack-rat’s instinct? A Scout’s instinct? An expression of some need to control an uncontrollable universe? A throwback to my hunter-gatherer’s roots, illustrating a lingering atavistic urge to haul wild celery over the plains? Who knows? It’s a mystery.

But whatever it is, you could well argue that this same gene explains the hideous purple paisley harem pants I wore (IN PUBLIC, SHE NOTES) in the early 1990s, which, now that I think of it, did indeed have extremely commodious pockets. I’ve never been able to explain to myself or anyone else why I wore them. Now, thanks to my late-life revelation, I have my answer. I get to blame dad.

4 thoughts on “mystery of the magic pockets”