(June 29, 2020: I first published this on F.S.O. nearly three years ago, but it’s never felt more relevant — so I’m pinning it to the top of my blog in the hopes it’ll reach more eyeballs. And because we all need to be reminded, I’ll say it right off: Black Lives Matter.) 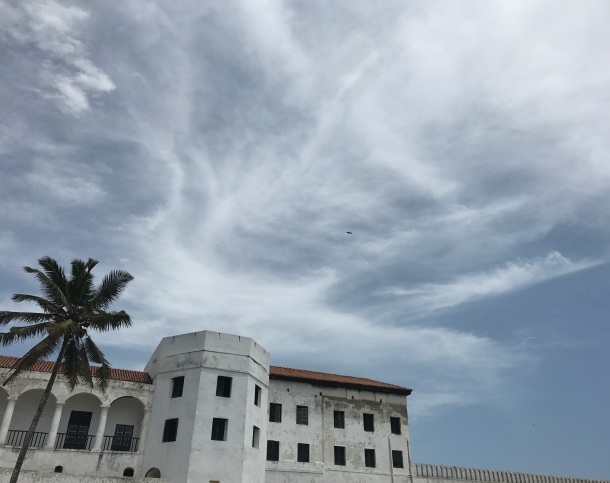 As I stood there in the cells and dungeons, I could feel them: The weight of people who had suffered there, starved there, lay in chains in their own vomit and excrement. Those who died in the airless dark. Those who lived only to die, stacked like lumber, on ships to the Americas. Those who made it to distant shores only to find themselves bound in servitude, forever torn from family and home.

Touring the “slave castles” of the Ghana coast — the fortresses where untold numbers were held captive before the crossing — I felt this, and I wept. It’s all I could do. That, and dwell on all the generations of African-Americans who’ve grown up knowing only that their ancestors traveled this torturous route across the ocean. I don’t know much about my own ancestors, but as a white American, I know where they came from: Italy, Germany, Scotland, England, France. Too many Americans of African descent don’t even know that much. Too many can’t say which homes their forebears were stolen from.

This all hit me, as I stood there. I thought of their ancestors, shackled in those very rooms, nameless to the men who held and beat and raped them but known to the loved ones left behind. I thought of the profound — beyond profound — evils of the slave trade and the centuries of anguish, obstacles and disadvantage endured by its victims and descendants in Africa and the Americas both. I thought of Black Lives Matter, and the critics who rebut it with “All Lives Matter,” not realizing they’ve just articulated the point. Lives are exactly the point. All is exactly the point. All includes Blacks. Had All Lives Mattered from the start, Black Lives would never have been seized and sold and shipped and enslaved and then, over centuries of bias, routinely and tragically diminished.

This is obvious, or it should be. I’m not pretending to have insights into the African and African-American experience. I am not presenting myself as any kind of scholar, or as anything but a woman who spent a week visiting her daughter on a semester in Ghana and, while there, bought and read a short book on the slave trade and castles. We visited two: Elmina, built in 1482 and run by the Portuguese, then the Dutch, then the British; and Cape Coast, built in 1653 and held principally by the British.

I didn’t take photos of the interiors of either fort, just exteriors and a few plaques inside. Shooting more would have felt disrespectful. People wasted away in those buildings. They died of cholera and malaria and starvation. Those who fought or tried to flee were thrown into a tiny cell with no light and no air and no food and no water and no hope for escape, not in this life. In both castles the guide brought us in, shut the door and turned off the light.

We stood in silence. The hows rained down. How many had died there, alone in the dark? How many days did it take them to expire? How did anyone survive in these fortresses of savagery and genocide? How did the Europeans convince themselves that the people they held weren’t people? How did any of this happen? How did it continue for hundreds of years? How can Americans reconcile this history with the dreams and ideals we claim to revere? How can we move forward? How can we make amends? How can we ever comprehend the lives lost, the damage done, the legacy of torture and statelessness and unfathomable pain?

I felt indescribable grief. Plain, immense, baffled, pressing sorrow. And I thought: I wish all Americans could stand here. Reading about history is one thing. Feeling the weight of its crimes in the place they were committed is a revelation of staggering impact. I’ve never been to Auschwitz; I imagine it’s the same.

One of the plaques I photographed was this one, which hangs in the the courtyards of Elmina and Cape Coast both.  It includes this appeal: “May those who died rest in peace. May those who return find their roots. May humanity never again perpetrate such injustice against humanity. We, the living, vow to uphold this.”

There it is. That says it all: Peace. Humanity. Injustice. We, the living. 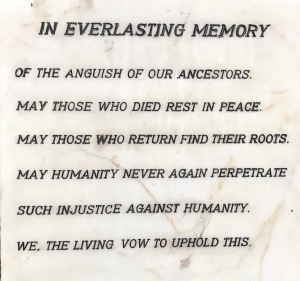 14 thoughts on “slave castles — and the weight of history”