“SPIT TO HERE,” it said, and so I did. I spat. I spat again. I spat in pursuit of a dream. I spat to know myself. I spat in the hopes of learning more about Me and My Ancestors and Where They Came From and What It All Means and Who The Heck Am I, Anyway? I spat because there’s only so much self-discovery you can glean  through extensive navel-gazing and online genealogy surfing,  although I have learned a few things, among them the cavernous depths of my navel and and likely traces of my paternal great-grandfather in Argentina.

No, he wasn’t Argentinian. He arrived there from Uruguay, but he wasn’t Uruguayan, either. He was Southern Italian. His wife, who remained in Uruguay and later left for the States with the kids, hailed from Italy, too. It’s a long story, ridiculously complicated — even without all the facts. But isn’t that true of every family tree? Isn’t everybody’s a tangled hodgepodge of the known and the unknown, the spoken and unspoken, the surmised, the passed down,  the gossiped about, the hinted at, the whispered, the feared?

Mysteries and complexities abound. Truths untold turn into stories, then bend into myth over time. A dying matriarch might whisper a truth in her last breaths, or not. I know something about my heritage; I know that my father was Neapolitan, my mother EnglishScottishGermanFrench. But were they something else or more than that? Am I something else or more? Perhaps it’s a function of being older and sensing a limit to both my time on this planet and my understanding of things that are knowable. So few are. So many burning questions can’t be answered, not by anyone still living, that I desperately want to puzzle out and solve the handful that are.

I want to know.

And so, for Christmas, I asked my kids to get me a DNA kit from Ancestry.com. I delayed doing anything with it for the next month, not out of conflicted ancestral dread but from a lifelong tendency to misplace things in the process of trying to safeguard them (OH I DON’T WANT TO LOSE THIS SO I’LL JUST TUCK IT UP HERE ON THE DRESSER BEHIND THE CLOCK RADIO AND PRAYER BOOK AND COIN JAR AND X-FILES MUG AND RANDOM PILES OF PAPER AND SHIT). After stumbling across it I cracked it open and did all the required spitting, which took longer than anticipated, then sealed up the tube, packed it off in the enclosed box and walked it two blocks to the neighborhood mailbox, being careful not to dispatch it at the nearby trash bin where I once absentmindedly dropped off a month’s worth of bills.

It could take two months, maybe more, before I hear back on the results. And when they arrive, they could contain no new information. They could do nothing but confirm that I am what I always thought I was, plain ol’ ItalianEnglishScottishGermanFrench.

Or they may tell me something more or else. Something that clarifies my heritage while flipping the family’s history on its head. Either way, at least I’ll know. 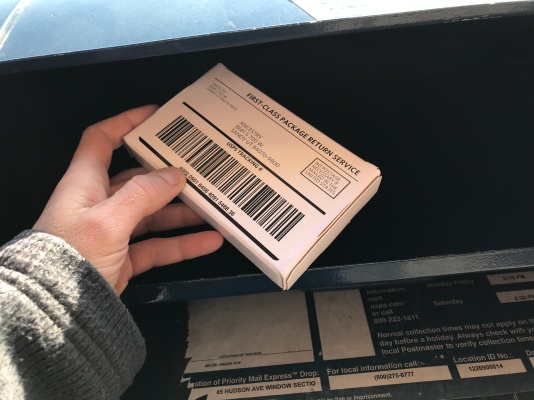 4 thoughts on “spittin’ for the truth”