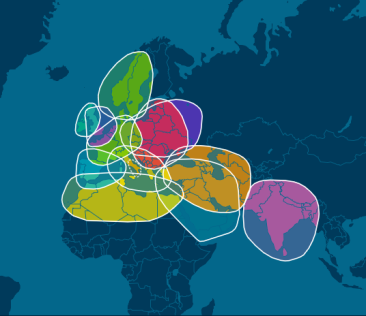 So I got back my DNA kit results, and guess what, everybody! I’m a mutt!

I mean, I always knew I was a mutt. I always knew the paternal half of my DNA was southern Italian, the maternal half EnglishScottishGermanFrench (and as my mother always added, “Thank God for the French”). Except I’m not really. Not entirely. Nothing so tidy as half anything.

I am, as it turns out, exactly 76 percent of what I thought I was,  the unsurprising bits breaking down into 36 percent Southern Italian, 29 percent Western European, 7 percent Scottish-Welsh-Irish and 4 percent British. But my variegated ethnic muddle also includes another 24 percent of unanticipated factors: 6 percent Middle Eastern, 6 percent Iberian peninsula, 5 percent European Jewish, 4 percent South Asian and traces from the Caucasus, Eastern Europe and North Africa.

To which I say: HOW COOL IS THIS? Almost a quarter of me is previously unadvertised genetic material!

In truth, family lore already suggested some Jewish blood on the Biancolli side, so that didn’t surprise me — although I wonder about the DNA markers for “European Jewish.” What does that mean, exactly? Ashkenazic? And I’m fascinated by the Middle Eastern and South Asian components, which amount to a whole 10 percent of my genetic makeup. Not too shocking, given Southern Italy’s location at a giant crossroads and humanity’s tendency to schlep goods and people back and forth across bodies of water, pausing to make babies along the way.

I’ve only just started scratching the surface of these results. But already, noodling around the “DNA Matches” on Ancestry.com, I found relatives in Argentina. Argentina! Confirming yet more family lore on the Biancolli side! I hesitate to dive too deeply into specifics, which A) aren’t quite verified and B) are so convoluted I might lose consciousness trying to explain them, but C) involve great-grandparents who emigrated from Italy to Uruguay in the 19th century and D) also involve a great-grandfather who later bolted for Argentina.

Even minus the tangled South American subplot,  I’m faced with a genealogical narrative of stunning mystery, complexity and depth. How on earth am I going to unpack it all? My Middle Eastern heritage — what does that mean? My South Asian chunk — am I part Indian? Pakistani? And the Iberian business — could that be on my mother’s side? If so, to borrow one of her favorite turns of phrase, the news would have tickled her pink. In her heart of hearts she was Mediterranean.  She longed to hail from a land of sun. Not for nothing did she marry my father. 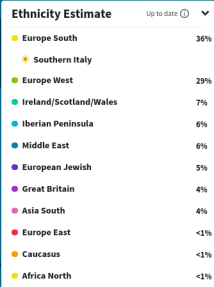 But for all the glorious genetic complications in these Ancestry.com results, the takeaway is a simple one. We’re connected. We’re related to parts of the world and pieces of history that we might not comprehend, but the connectedness alone is revelatory. Look at me. Not half Italian, as I’d always believed, but a little more than a third. The rest, it seems, is a beautifully confused gumbo of ingredients I may never understand.

So whatever you think you are, you probably aren’t. Not quite. You’re more. More of a rainbow. More representative of homo sapiens sapiens and its unconquerable itinerant spirit. More of a wanderer, an immigrant, a child of multiracial forebears. More connected with every other person on this planet. More a member of the refugee human race and less a member of any so-called race we use to classify, to separate, to oppress.

12 thoughts on “the beautiful human gumbo”