I GOT MUSIC: CONFESSIONS OF AN AMATEUR
PART IV: IN PRAISE OF SECOND FIDDLE

“Second fiddle”: as a violinist, this idiom bugs the crap out of me. It always has. Discussing it recently with friends, I expressed no small umbrage at the phrase and its demoralizing message in a world that undervalues the dusky contribution of second violins. To play second fiddle is “to be less important or in a weaker position than someone else”: So sayeth the compilers of the Cambridge Dictionary, the jerks. (Yes,  yes, I know it’s not their fault — they’re only reporting on accepted usage. But after seeing their ridiculously cutesy example invoking some dingbat named Christina, I AM STILL GOING TO CALL THEM JERKS.) 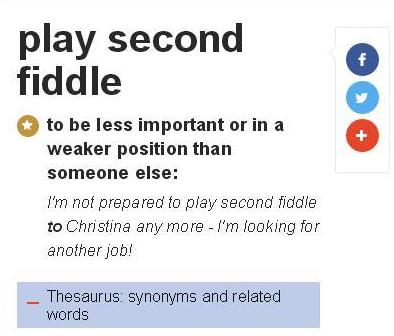 See, this is the other problem: although I’ve played the violin for most of my life, I never actually worked at it. Not the way other people work at it. I never set aside, say, two hours or three or four or six to run through scales and arpeggios and etudes in pursuit of EXtreme-Ass Musicality (EXAM), chiefly because I was busy adhering to my preexisting policy of NO Practicing Ever (NOPE) compounded by a Sad and Pathetic Lack of Theory (SPLAT), but also because I knew without even trying that I would never actually attain said vaunted state. I knew EXAM was beyond my reach. I knew my mother had already attained it on the violin; my sister had already attained it at the piano. I knew what they sounded like. I knew I’d never get there. I knewknewknewknewknew.

But this knowledge never stopped me from playing — and loving it. It only stopped me from expecting or pursuing perfection. And it never stopped me from hearing music everywhere, from feeling its thudding bass and slinking harmonies and wanting to join in. As a kid I heard entire orchestras in the engine of our ’72 Corolla. As a teenager I quit the violin for several years to play soccer and pick my nose, but I sang alto in the school choir and relished the low notes that scraped the underbelly, far below the sopranos. I never wanted to join them on top. “You’re a soprano with a big range,” one teacher after another told me, and I always wondered why no one ever characterized me as an alto with a big range.  I always said gee thanks but nope, uh-uh, no soprano parts for me. I prefer the dankest recesses of the woman’s range. I prefer grubbing around the bottom of the treble staff, the musty places where harmony gets built on the violin, because that’s where the music happens.

I like how alto feels in my chest. I like how it sounds. I would rather hear the melody soaring above and beyond me than use my own body to sing it myself. I would rather play the harmony in a second-violin part than go up into a nosebleed on the first, and I’ve always preferred it that way. Even if I’d practiced two hours a day or thee or four or six for decades and decades, I’d still want to live in the thrumming lower end of any given music.

I wonder about our American obsession with leadership, with rising to the tippety-top at every life-stage, with proving our power and expertise and authority and our status as Alpha-Human Hot-Shit Type-A Everythings in school and sport and vocation and avocation and avocado sales, which I only added to the list because I just noticed the startling similarity between those two words. But seriously: WHY DOES EVERYONE HAVE TO BE THE TOP AT EVERYTHING? Doesn’t Captain Kirk need Scotty in the bowels of the engine room? Don’t the owners of a building need someone in the sub-basement, tending the furnace? It’s the same with music. One solo voice can’t carry all of western harmony. If everyone sang soprano, we’d have no Bach choral works. If everyone played first violin, we’d have no Beethoven string quartets: the Grosse Fuge would be a little less Gross, and I’d be a little more heartbroken.

The revelation, for me, occurred with my entry into the world of jazz, where there is no First This and Second That, just Whoever Happens to Be Playing Something Interesting On Their Instrument at the Moment, Amigo. I’m one of two violins in my six-piece gypsy-jazz band, and we take turns at everything: melodies, solos, comping chords and harmonies underneath. Every single one of us plays at the upper, middle and lower ends of our instruments, although the bass player’s high end makes my low end sound like Dolly Parton on crack.

In some Django-style bands, one guitarist is permanently on rhythm, another permanently on lead, but there’s no innate hierarchy. Jazz is thrillingly democratic. Everyone grooves on harmony. Everyone spends time in that beautifully fertile underworld where music sparks to life. Everyone plays second fiddle, at least for a spell, and nobody diminishes that role when they do. Maybe that’s why I love it. Maybe that’s why, after all these many decades of NOPE and SPLAT, I’m actually, finally working at it. I’ve found my permanent musical home.

Anyway, who cares about the Cambridge Dictionary. Jerks.

8 thoughts on “i got music, part iv: in praise of second fiddle”